For a while, I traded places along the trail with Katelyn and her peeps. When they stopped for a rest, I passed them, and vice versa. I walked with them for a while and learned that they were from Sacramento. I let them walk ahead of me as I had to stop for yet another break to catch my breath.

Just before I reached the vista point, I spoke with a woman on the trail that was resting with her crew. I told her how exhausted I was and that I didn’t think I could make it any further.

You’ve already completed about 90% of the hike. You’ve come too far to turn back now.

Come too far to turn back now. Those words echoed in my head. What a shame it would have been for me to turn back then. I had fought through so much to get to where I was. The thought of turning back was unfathomable.

I was so grateful for the words of encouragement that came my way when I was feeling at my lowest and about to give up. It was like being caught in the middle of a battle. First, the negative thoughts attacked. Then, positive words of affirmation and life were spoken to me to combat those thoughts and send them packing.

For the weapons of our warfare are not carnal but mighty in God for pulling down strongholds, casting down arguments and every high thing that exalts itself against the knowledge of God, bringing every thought into captivity to the obedience of Christ.
2 Corinthians 2:4-5 (New King James Version)

I never fully grasped the true meaning of that scripture until after the hike. At the time I wrote the outline for this essay, I recorded all the thoughts I had along the journey, both negative and positive. It was then that I was able to see in writing the beauty of the situation. It was like catching those negative thoughts and putting them into a box, then filling that box up with positive words and affirmations until all the negative thoughts spilled out of the box and were replaced with the positive ones. 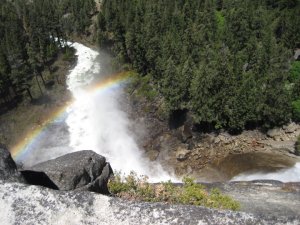 That is how you bring thoughts into captivity to the obedience of Christ! Once I grasped this principle, I began arresting my negative thoughts on a daily basis.