We rejoined the guys and headed toward Sub Dome. To say those freakin’ steps were brutal is an understatement. The best way that I can describe them is that they were stairs carved into a huge rock leading straight up into the sky, or so it seemed. They made the Mist Trail and Nevada Fall steps seem like steps in a kiddy park.

I saw healthy-looking, athletic people stopping multiple times on the way up to catch their breath. And, of course, every couple of steps, I had to stop. I kept waiting for Bre, Andy or Mike to complain or say something, but neither of them did. They were so patient and true examples of God’s love and grace.

Finally, we saw the light and the end of those crazy steps. What was funny to me was that I had miraculously gained a fresh wind. I also didn’t fear heights as I thought I would up there, at least not where we were thus far. We hiked up Sub Dome to the saddle, which connects Sub Dome to Half Dome, the “mother lode”, as some call it. I couldn’t believe my eyes. We had finally made it to the cables. There was a line, so we didn’t get to just latch on and go up. We had to wait a while. However, the wait turned out to be a good thing.  A very good thing, indeed. 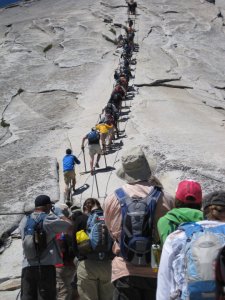