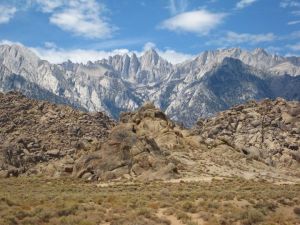 The morning sun blazed into the window of the dorm, immediately rousing us from our peaceful sleep.  Farrah and I were the only two remaining in our room as our other roommate left before either of us awoke.  As we began loading our things into the cars, we met up with our other hiking friends, Eddie, Arthur and Gina, who were preparing to leave as well.

After we got everything settled into the cars, Eddie asked if I’d like to join them for breakfast before heading back to L.A.  They were considering eating at a place across the street from the hostel, but suddenly, I remembered a legend I’d heard about a place Mt. Whitney hikers go to eat these enormous hotcakes prepared by a man named Doug.  According to the legend, whoever can finish one of the hotcakes gets their meal for free.

The town of Lone Pine holds so many legends.  There is even a fountain in the middle of town where if you toss in a coin, you are supposed to meet your true love.  It’s sort of like the Trevi fountain in Rome.  I’m not very superstitious, but since I’ve been waiting years to meet my true love, I figured it wouldn’t hurt anything to try it.  So I tossed in a dime when no one was looking.

I went inside the hostel office to inquire about the legend of the hotcakes and was told that we could find them at the Whitney Portal Store, thirteen miles from where we were.  Since the attendant said it was worth the drive, we decided to try it.

We set out onto Whitney Portal Road and pulled off to the side of the road to take some pictures of the rock formations.  Suddenly, a mysterious man in a pickup truck stopped and asked Gina and I if we would be interested in seeing some points of interest on a map he showed us.

The man, who introduced himself as Johnny, looked like he came straight from the set of Bonanza.  He wore a cowboy hat, tight cowboy pants, boots with spurs on the backs, and a bandana.

“Has anybody ever told you that you look just like…”  I couldn’t even finish my sentence.

“John Wayne,” Johnny said.  His lips pursed into a cunning smirk and he laughed.  It wasn’t a jovial, fun laugh either.  It actually sent a chill down my spine because of the somewhat sinister tone.

The map he brandished showed places where you could see certain rocks that were in shapes of different animals, such as Rabbit Rock, Hippopotamus Rock, Elephant Rock, and so forth.  Johnny then pointed to a rock on the map shaped like an arch.  He told us that if we didn’t get to any of the other places we at least had to go to the arch.

Gina was intrigued and so was I.  I motioned for Arthur, Eddie and Farrah to come over to see if they would be interested in going to the arch.  According to Johnny and the map, all we had to do was make a left turn on Movie Road.  I thought that was an interesting name for a road out in the middle of rocky terrain surrounded by mountains.  Apparently, the road was named as such because of all the westerns filmed in the area back in the day.

While everyone was on board to go see the arch, we were all hungry, so we decided to go see it after breakfast.  Johnny seemed somewhat taken aback that we were going up to the Whitney Portal Store for breakfast.

“You kids beware of that Doug.  Hopefully, you’ll catch him on a good day,” said Johnny.

“What is that supposed to mean?”  I said.

“And you might want to check out his book.  He’s got a lot of info in it on Mt. Whitney.”  With that, Johnny tipped his hat to us and left.

The five of us looked at each other, puzzled.  Eddie was the first to move.  “Well, let’s get going.  I’m ready to get some of those hotcakes in my stomach.

As I prepared to get into my car, I glanced down Whitney Portal Road and noticed Johnny’s truck moving very, very slowly.  All of a sudden, I was overcome by a strange feeling, an evil foreboding.