I had given up on some dreams recently. Dreams that were dearest to my heart. Dreams that I’d had ever since I was a child. Because it looked like those dreams weren’t ever going to come to pass, I just tossed them all out the window and said, “Forget this crap. I’m done. I’m over it.” I basically shook my fist at God. If I could have thrown something at him, I would have. He probably got a good laugh out of it.

I climbed another BIG mountain a few days ago, a fourteener, as the mountaineers call it. This wasn’t necessarily a dream of mine. I just wanted to do it because I knew I could and it was a new mountain for me. Plus, any climb that promises majestic views at the top, a reward for such physical and mental torture, is worth it in my book. 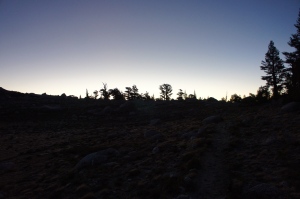 The first part of the hike was easy to moderate, even though we began our trek in the dark using headlamps to light our way. I felt really good because that part didn’t require much physical effort, and for the most part, I stuck with the group. But that part of the hike was deceiving. What loomed ahead was about 4,000 feet of elevation gain and it seemed to come all at once. That’s when the challenge began and I was no longer able to maintain pace with the group. 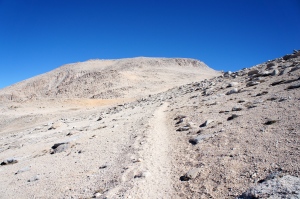 I struggled because I was getting higher in elevation and it was becoming more difficult to breathe with exertion. I contemplated giving up several times along the journey, especially when one of the leaders, who I was communicating with on a radio, decided to turn around. ‘Just how hard is it up there? It can’t be THAT bad,’ I thought.

I pressed on a bit further, constantly checking the distance of the “peak” looming before me. It seemed to be getting closer, but I didn’t feel any better, especially when I saw the other hike leader on his way down from the summit with some of the people in our group. He told me that what I thought was the peak was actually not it, and that the peak was on the other side and not in sight.

I was so discouraged at that point, so I just sat on a rock to contemplate whether or not I should continue on. I met another leader from different group who flat out told me that it wasn’t worth it and that I should just go back with him and his group. But I stayed. I didn’t have any altitude sickness, I just felt defeated on the inside.

Despite the discouragement, deep in my heart I felt the push to go further. In my heart, I felt that I was supposed to be on that summit on that day. But that didn’t make the journey any easier. Actually, the higher up I went, the harder it became. Then came the rock climb where I had to ditch my trekking poles and use my hands. Rock climbing just below 14,000 feet is a tough slog.

Long story short, I made it to the top of that mountain, as you can see in the picture below. That is the face of someone who is more than a conqueror. When I saw that summit in plain view, about 50 yards in front of me, I literally cried. There was so much rejoicing on that mountaintop.

The bottom line is simply DON’T GIVE UP. No matter how hard it seems, no matter what people tell you. Even if you see others throwing in the towel around you, do not quit on the things that make your heart sing. If you see someone giving up, encourage them the best you can, but also know that it’s up to them to make the decision whether to keep going or not.

Your dreams may be like that mountain. You may be looking at that dream from afar, but it turns out that what you’re focusing your eyes on isn’t that dream coming to you, but rather a false peak. You have to go over that false peak to reach your dream on the other side. Just because you can’t see it, doesn’t mean it’s not there or that it’s not going to happen.

Celebrating on the mountaintop is a great reward and so worth the trials and tests that must be endured, but it’s in the valley and along the journey upward where our strength is perfected.