I had only been to San Diego maybe a couple of times and wasn’t aware of anything more exciting to warrant a visit than the zoo. The drive down there from LA can be horrendous and take hours, especially on a holiday weekend. So why did my friend Jodi and I decide to make the trip on MLK Day other than the fact we were bored with nothing else to do?

Well, we are both hikers and Jodi likes to push the envelope a bit further with her mountain bike. I had heard of this impressive geologic feature, a rock outcropping called Potato Chip Rock and decided it was something I just had to see. Some friends of mine had been there a while back and I had seen various Internet photos of people standing, sitting, doing wild poses on this seemingly potato chip-thin rock. 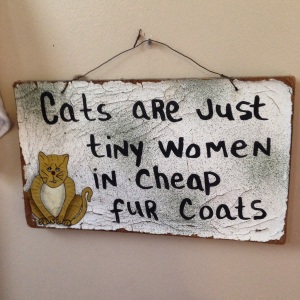 In addition to Potato Chip Rock, I had heard about a place called The Cat Cafe, which I discovered via an article shared on the Crazy Cat Ladies Unite Facebook page. I figured Jodi and I could go to The Cat Cafe first since it was downtown and then head back toward Poway afterwards and do the hike. Since the hike was only ~7 miles round trip, it seemed like an easy enough day. 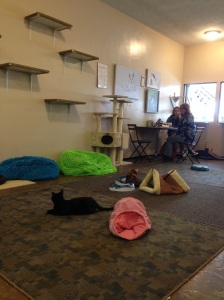 We left Laguna Hills early and arrived in San Diego around 9am, parked on the street and walked into the welcoming doors of The Cat Cafe. Now, in case you’re wondering, The Cat Cafe does not serve cats up for breakfast, lunch or dinner. What they do serve is a nice cup of joe that you order on one side of the quaint establishment and a separate playroom for the cats lined with tables and chairs for you to sip your espresso while enjoying quality time with new furry friends. 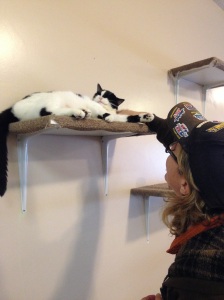 At the time of our visit, there were 13 cats and all were available for adoption for a mere $25. We stayed for about an hour and I really got to know Barry, a black and white tuxedo cat who came and chilled on my lap for a while. Jodi also met a new friend whose name escapes me. The cat that stole the show was a Calico kitten named Frida who was literally bouncing off the walls running over everything as a little boy toyed with her. She was so cute and entertaining. We could have watcher her all day.

We left The Cat Cafe around 10am and arrived at Lake Poway around 10:30. The sign on the gate warned that the gate would be closed at 5:00, so we knew we couldn’t waste any time. Neither of us had done the hike before, but the trail descriptions we read online said the hike was 6-7 miles round trip with a 2,000ft gain. The average completion time was listed as 3-5 hours. We made our way to the Mt. Woodson Trailhead and started our adventure. 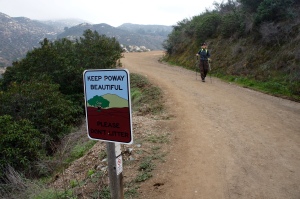 The trail begins a gradual ascent that takes you on a parallel incline providing expansive views of Lake Poway below. As we started out, it was pretty hazy with the marine layer, so we didn’t get the full lake effect until later in the afternoon on the way out. The marine layer served us well in keeping the temperature down because the trail is exposed pretty much the entire way. 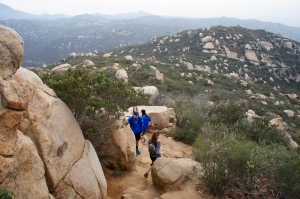 I had heard that the trail could get very crowded and didn’t know why I thought a holiday weekend would be less crowded. There were droves and droves of people of all ages, shapes and sizes enjoying this trail. Some only wore sneakers and carried a bottle of water. I figured that they had to be locals who most likely use the hike for conditioning purposes or just a regular workout. Jodi and I carried our backpacks and were in full hiking mode as if we were climbing Mt. Baldy (Mt. San Antonio). 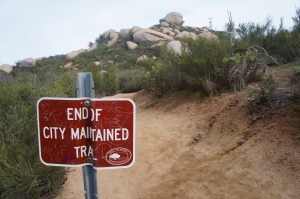 Speaking of Mt. Baldy, this hike felt a bit like a mini-Baldy in that it got pretty steep and rocky at times. The trail climbs up a well-graded path initially, but then you reach a point where the trail is no longer maintained as advertised by a trail sign. Then you ascend through a boulder field where you really have to watch you footing. Trekking poles would have been useful, but I left mine in the car. 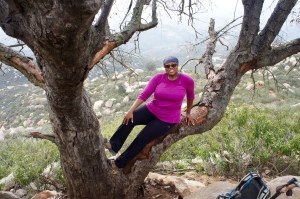 When we got to within about 1.5 miles of Potato Chip Rock, we reached a tree where people were sitting on a rock slab enjoying a snack, the views and the sun that was burning its way through the marine layer. We had a snack and took a few pictures, then were on our way again.

It wasn’t long before we could see the radio towers that mark Mt. Woodson’s summit, and then just below that, a colorful line of people was visible, which drew my attention to the rock outcropping known as Potato Chip Rock. When we reached the end of the line, we knew we’d be there for a while as we watched various people get upon the rock and pose for various shots that someone in line took. 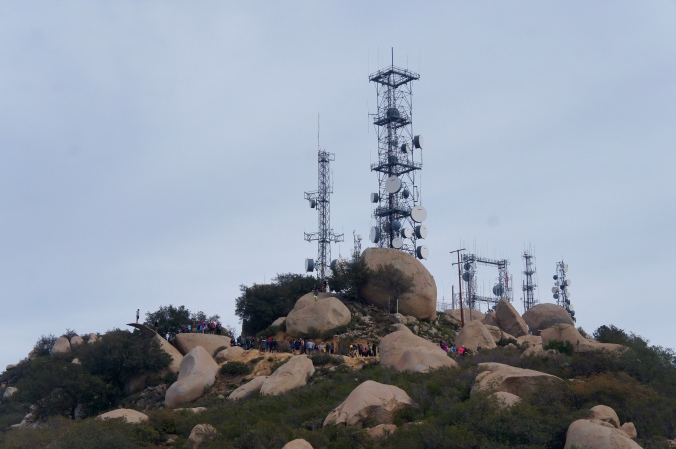 We patiently awaited our turn, and after about 45 minutes, were able to stand proudly atop Potato Chip Rock for our own personal two minutes of fame. Jodi got on first and I snapped a few pictures of her and then we switched and she did the same for me. I wasn’t bold enough to jump for a pic in mid-air like Jodi did, but I did sit on the edge swinging my legs. 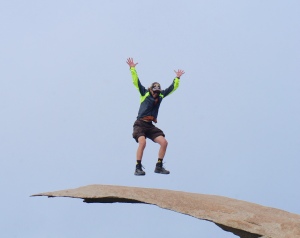 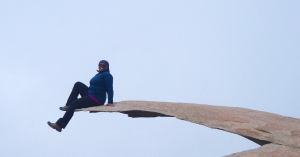 On the hike back to the parking lot, we saw the lake in all its splendor with the glow of the sunset adding a nice effect on the still water. We finished the hike in time to take the short stroll down to the lake for some pictures and still made it out of the gate well before closing time. Another adventure is checked off our list. 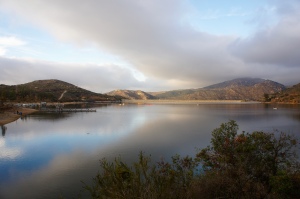