This is a really hard post to write. Not because it’s some gut-wrenching memoir about an experience I had on a hiking trail, but because I’m trying to type this on my phone while lying in a hospital bed. It’s not as easy as typing on a laptop, which is what I’m used to.

My thumbs have been getting quite a workout this weekend. I guess that’s a good thing since my legs aren’t and won’t for a while. It’s been three weeks since my feet have been on a hiking trail. When I take a rest, it’s normally for two weeks max. However, this rest isn’t by choice.

A couple of weeks ago, I decided to wear a pair of 5-inch wedge heels that were a gift to me from someone I knew. I don’t normally wear heels, but wanted to do something different and spruce up my look a bit. 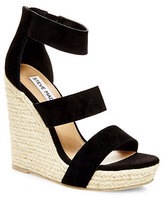 I wore the shoes to work and did quite a bit of walking and standing in them throughout the day. I felt a bit of a stretch in my left calf, but didn’t think much of it. I went on a stroll through the mall that weekend and noticed a slight pain in my calf as I walked, but still didn’t give it much thought.

The next day, I wore the cute wedges again to church where I do a bit of running around as I am a volunteer who delivers the CD and DVD masters of the sermons to go and duplicate. I do this for both morning services. As I moved about to and fro, I noticed much more pain in my calf, to the point it was difficult to walk at times.

As I walked back into the office to copy the CDs from the first service, I felt a snap in the back of my calf and almost screamed from the shooting pain that ensued. I mean, it literally felt as if someone had taken a pencil and jabbed it into my calf. It freaking HURT.

After that, the pain was pretty excruciating, but I put on my strong face and couldn’t wait to get to the car to change into my flip flops. But even when I did put the flat shoes on, I got little relief. I managed to attend lunch with some friends, but could barely walk or stand.

I went to the gym afterwards to do my usual Sunday routine of soaking in the jacuzzi thinking that would help alleviate the pain, but it did very little to help. In fact, later that night, the pain in my calf intensified. I winced in pain with each step as my cat, Mr. Frodo, observed, helpless. I knew he could sense something was wrong.

I went to work the next day, despite the severity of the pain in my leg which crippled my walk. I set my face like a flint and went about the day, even though I wanted to cry with each step.

I thought it was just the usual muscle cramp, like the ones I’m used to from returning to hiking after a period of inactivity. According to my experience with muscle cramps, it would be healed in a couple of days. Little did I know, this pulled calf muscle opened a whole new can of worms.

The next day, as I sat at my desk at work, I began to notice some tingling in my foot. It started around the heel and then expanded into my toes. This occurred for about fifteen minutes or so until I noticed that my heel was numb on the inside. I could feel the rest of my foot and could wiggle my toes, but something still didn’t seem right.

I had tried to avoid it, but the next day, I went to urgent care. The doctor basically looked me over, asked a few questions and measured my calf, confirming that it was swollen. He mentioned the slight possibility of a blood clot, but determined that since I didn’t have any of the risk factors there was no need to run this rather expensive (a whopping $125!) blood test. He told me to take some Advil for the pain and sent me on my way.

I thought the issue would get better and it did as long as I took the prescribed six Advil pills each day (three every 6-8 hrs.) What I didn’t realize was that the high dosage of ibuprofen might have been causing a different problem, while the catalyst to all of this was causing an even bigger issue beneath the surface.

Because my calf still hurt pretty badly going into the next weekend, I went to see another doctor. This doctor looked me over, and although he was a little more thorough than the previous doctor, he didn’t run any tests, but only pressed on different parts of my leg asking if it hurt. Since it didn’t hurt when he squeezed my calf, he ruled out a tear and said my calf was most likely pulled or strained.

The doctor did mention that my calf was tight, but didn’t do anything beyond that. I even told him that my heel was numb and my ankle was swollen. He just said it was part of the calf injury and it would get better.  I asked if he thought it could be a blood clot and you know what he told me? He said it wasn’t a clot because I had hair on my legs. No, I didn’t shave that week, in case you were wondering.

I left the office, still not satisfied with the diagnosis, which I now know was a huge MIS-diagnosis. There was a bigger issue going on in my leg than I ever thought and not one, but TWO doctors dismissed me and sent me away without performing any tests.

A few hours after I left that second doctor’s office, I began experiencing pain in my heel that expanded throughout the afternoon and evening. I knew I could only continue taking Advil for three more days as suggested by the second doctor because the high dosage was apparently (according to the second doctor) spiking my blood pressure. I had never heard of that.

The pain in the bottom of my foot worsened each day. At times, I literally had to fight for each step and hold into something, almost hopping on my good leg. It was excruciating. There were days when I would leave work and just sit in the car and cry for a few minutes before driving home. I had never felt so helpless. Every day, I cried out to God to take the pain away, to just heal me, but instead of getting better, the pain only intensified.

Those words came to mind from a book I read years ago called “The Maker’s Diet,” by Jordan Rubin. I left work on Friday and high-tailed it over to the ER down the street, which happened to be at a highly esteemed medical center.

I was checked out by two assistants and they were on it. The minute I told them the story of my calf injury and began explaining the symptoms I’d had since, they immediately ordered my bloodwork done. In the bloodwork, they found an indication of a possible clot, so they sent me for an ultrasound. That’s where they confirmed my biggest fear. An extensive blood clot that runs from my thigh down to my calf.

I was shocked, not only because I had a clot, but because of how easily I was brushed off by the other two doctors who saw me. If I had taken their word and went on waiting for things to improve, I would have had an more serious problem on my hands. Thankfully, I went to the ER and received the proper diagnosis and treatment.

Which brings me to where I am now, sitting in a hospital bed on the cardiac floor of the hospital. I was told I’m the youngest patient here. That doesn’t mean younger people can’t have these issues. It can happen to anyone at anytime.

The doctor here at the hospital believes this clot was a result of my calf injury. It’s so important to pay attention to our bodies. They were designed with an alert system that tells us when something isn’t right. If I hadn’t heeded those warning signs, who knows what would have happened? Deep Vein Thrombosis (DVT) is serious and should not be taken lightly.

Thank God I’ll be going home soon with a prescription that will help me get on the road to complete recovery. I’ll hit the trails again, but it will have to be baby steps at first.

Robert Frost said it best, “I have promises to keep and miles to go before I sleep.”

On the heels of the 4th of July, today’s episode ironically represents freedom.  This and previous episodes are available on iTunes.

Life on the Edge: Beauty for Ashes