On Thanksgiving weekend, my boyfriend Bill and I took Cody on his first ever camping trip. From the moment we started packing up the car the night before, Cody was filled to the brim with excitement over what his new adventure had in store. He had no idea where we were going, but he knew we were going somewhere, and that was all it took. The next day, we were off to Death Valley for a weekend of camping and hiking with friends. Although this wasn’t my first visit to Death Valley, each experience is unique and special, and I was happy to share this one with Bill and Cody.

We weren’t sure how Cody was going to do on his first road trip, so Bill covered up the two large ice chests on the back seat with a comfy towel so he could relax and still be able to see the open road in front of us. First, he wanted to sit on my lap, but Bill nudged him to the back seat and he laid down on his towel. He looked so cute on his makeshift bed.

Death Valley is quite a drive from Long Beach. We decided to take the scenic route and drove in via the 190 from Olancha in the Eastern Sierra. It was a bit of a longer way in for us, but being that it was the more scenic route, we didn’t mind the extra time on the road. Plus, we got to see some of our beloved Eastern Sierra.

Upon our entrance into Death Valley, we stopped at our first vista point, Father Crowley Overlook. Bill, Cody and I got out to take a look and were instantly captivated by the majestic sight before us. I thought it looked like a mini grand canyon. Little did I know, we would see other places in Death Valley that were even more similar to the Grand Canyon. Cody was just as excited as Bill and I were.

Death Valley is on record as the hottest, driest and lowest place on Earth. The hottest rating doesn’t apply in November, though. However, the climate is so arid that it’s very important to stay hydrated, even if the cooler temperatures don’t make you “feel” thirsty. Bill and I made sure to bring plenty of water for ourselves and for little Cody.

I had been using this new Bubi Bottle and Bowl on some of my walks around town with Cody and was anxious to use them at Death Valley. Made from BPA Free Silicone, the Bubi bottle is ideal for kids, pets, work, travel, sports and adventures of all sorts. It was the perfect gear combo for our trip to Death Valley. 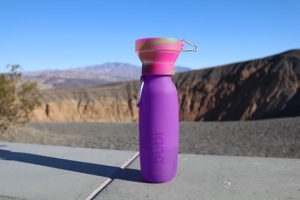 I’m so used to carrying plastic bottles of water on my adventures and they get to be pretty cumbersome after a while. When I’m out on the hiking trails, especially when doing long distance hikes, I drink a lot of water, and water sources along the trail are not always available. Carrying back empty bottles are quite a pain. Hydration bladders are more convenient, but they are hard to clean, as are the plastic 1-liter bottles. The Bubi Bottle is so soft and flexible that it can be cleaned inside-out.

When Cody and I took a break, I pulled out the Bubi Bottle and had a drink for myself, then attached his bowl to the top, unscrewed it and poured him some water. He gladly drank it as he was super thirsty from being exposed to such a dry climate. He loves his bowl so much. It wasn’t super warm or cold during the day, so we were fine drinking the water at air temperature. Since it cooled down overnight, the water had enough of a chill to keep us refreshed.

After we downed all the water, I scrunched the Bubi Bottle down, collapsed Cody’s cute little matching bowl and stuffed them into Bill’s pack. Even when the bottle was completely full, nothing spilled or leaked into the pack. The Bubi Bottle’s puncture-resistance withstood the beating that we gave it. I’m looking forward to using this bottle and bowl on future adventures. It’s so lightweight and portable that sometimes I forget I’m carrying it…until it’s time for a drink of water. 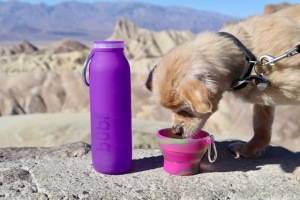 Cody enjoyed his first road trip/camping trip. There were so many sights and smells that he loved to explore and we had fun watching him. The smiles on his face were priceless. Cody did have a little scare the last night of our camping trip. He was sitting with Bill on a picnic bench near the campfire and a coyote approached. Neither of us saw it, but Cody did, and he freaked out and tried to go after it. Cody is a little dog, but very strong. It took Bill quite a bit of effort to restrain him. Thankfully, the coyote ran off into the night and we were all able to breathe a sigh of relief, but we remained on alert the rest of our time there.

On the drive home, we took a different route than the way we came in and stopped at the Trona Pinnacles, an area that sparked my curiosity a few years ago when passing through on the way to Death Valley. The Trona Pinnacles consist of an area of tufa formations, similar to those at Mono Lake near Mammoth Lakes, CA. 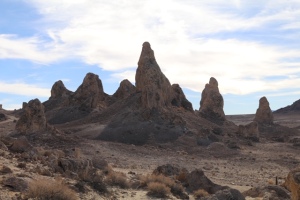 You have to drive five miles on a fairly well-graded dirt road to get to the Pinnacles. Then you arrive at the official entrance. Beyond that, you can drive in a loop around the Pinnacles or take the hiking trail and walk among them. There is a map posted at the entrance so you can easily familiarize yourself with the layout. 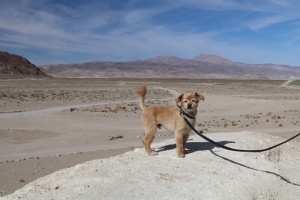 Bill drove us around, then we stopped for a break and had lunch. After walking around the Pinnacles and doing a bit of rock climbing, Bill, Cody and I headed home. What a fun weekend.

This is the first part of our series of adventures in the Anza Borrego Desert. On this first day of the adventure, we caravaned from our campground at Borrego Springs and explored a narrow slot canyon that featured some extraordinary geological formations, such as a huge balanced rock and a cave.

For more information on hiking The Slot, visit hikespeak.com.

To find out how you can join a domestic or international adventure with 1000 Treks, please click on the following link: 1000Treks.